And the feud between Rihanna and Ciara continues.

“I think she’s nuts right now!,” Ciara said. “Like whatever’s going on because for me it doesn’t make any sense. I don’t have beef with anybody, but I’m not going to be disrespected either. I wish her well. I don’t know what her problem is. She has a lot of good things going on with herself. A lot of good things I’ve always said I’ve been happy for her. I don’t get it. I really don’t, but I wish her  well. I wish her positivity.”

Rihanna didn’t like Ciara’s comments. The Diamonds singer, who cancelled her Houston show last night because of an illness, decided to vent her frustration on Instagram. RiRi took another jab at Ciara after someone posted the story on Instagram.

Rihanna wrote, “How u gon hate from the outside??? Thanks for the free promeaux sis!! When will they start asking her questions about HER? Ciara opens up…(wait for it) about Rihanna.” 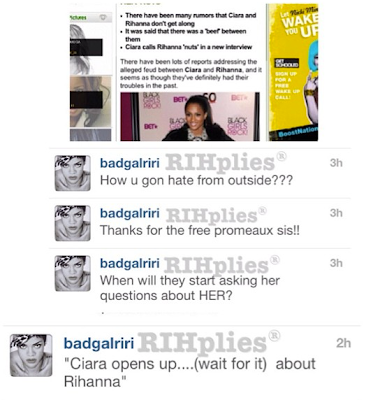 Once Ciara caught wind of the comments, she tweeted: 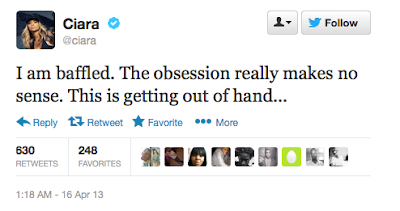 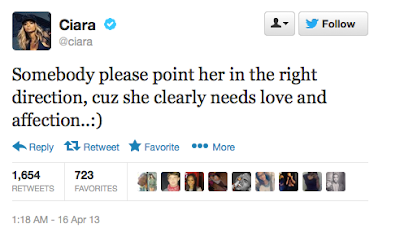 Some speculate that their beef may be over Future. The Atlanta rapper wrote Rihanna’s song, Loveeeeee Song, which he is featured on. But now he’s dating Ciara and helping her write songs for her new album that is scheduled to be released later this year. But knowing Rihanna, she’s probably taking jabs at Ciara just for the hell of it.

Ciara once toured with Rihanna, opening for her Good Girl Gone Bad tour in the United Kingdom along with Chris  Brown and Akon. The two later had a public spat in 2011. It began when Ciara admitted on E!’s Fashion Police that she ran into Ciara at a party and she wasn’t very nice.

“I ran into her recently at a party,” Ciara said. “She wasn’t the nicest. It’s crazy, because I’ve always loved and respected what she’s done in fashion. It wasn’t the most pleasant run-in.”

RiRi reacted on Twitter, “My bad ci, did I 4get to tip u? U gangsta huh? Haaa.” Ciara responded, “Trust me Rihanna you don’t want to see me on or off the stage.” RiRi fired back, “Good luck with bookin that stage u speak of.” Ciara replied, “Pure comedy.”

RiRi later backpedaled, “Ciara baby, I  love u girl! U hurt my feelings real bad on TV! I’m heartbroken! That’s y I retaliated this way! So sorry!” Ciara responded, “Rhi, u know its always been love since day 1! Doing shows and everything. You threw me off in that party! Apology accepted. Let’s chat in person.”