Rich Dollaz ex-girlfriend Tiffany sat down with Olivia and revealed that she was intimate with Erica. Tiffany told Olivia she only hung out with Erica to spy on her in hopes of getting back with Dollaz.

“Basically, I hung out with Erica, how can I say this, spying for Rich,” Tiffany told Olivia. “I pretty much slept with Erica. She’s telling me she loves me.”

Erica confirmed on Twitter that she slept with Tiffany. But she claims she only let her go down and then she sent her home in a $1 van. 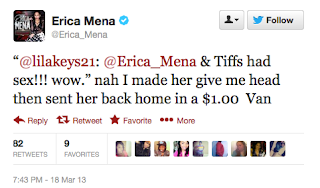 BallerAlert.com posted a story about Monday’s episode on Instagram and got some juicy comments from Tiffany and Erica. Once Tiffany, who goes by the name TiffySway on the social network, read Erica’s comments she went off.

This b***h is f**king for bags of weed sound like a crack head when she use to call me saying ill eat ur p***y just bring me a bag plsssss! Remember that b***h

I got 5 months of stories on @iamerica_mena so this b**h better chill!! U called me  every night trying to eat my p***y! After the 1st night I was like na keep that stretchy sh*t over there!

Ddn’t ur homie, who’s house u stayed at since u were homeless, #fact fly ur son n mom here to ny to see u cause u cldn’t afford it!! B***h I’m comin with #facts! @ericamena

[My] friends watched this b**ch beggggg me to eat my sh*t n I said no!! 1 time was fine with me!! Remember that b**ch!#facts had to tell ur bum ass I was on my period just so u can leave me the f**k alone! I’m coming with #facts b**ch! Not fake ass $1 van stories!

I have everything! Texts from her asking me if Envy is in the club with his wife who she referred to as the trani! N a million others!! Where the f**k is her proof of this so called p***y eating n $1van that again dnt exist is jersey!! This b**ch @iamerica_mena does not want to play this game with me!! I’m not beat for her ratchet bird ass!! Actual feel sorry for her! That’s y I wasn’t saying much! N it’s not my style to go chirping around town but this b***h is goin to make me start a facts on Erica blog about her trips to turkey n cabo to f**k niggaz for money international hoe! Her fake bags she bought overseas n post on Ig! Her friends clothes n shoes she post from Ig! I have pics from turkey b**ch! Leopard dress kissing the nigga that u were flown out to f**k!! Dnt f**k with me! I’m trying real hard not to act out if character but she is def testing me!’ #fuckmenamondays#turnupTiff

Tiffany also posted receipts with pictures of who she claims is the man Erica was tricking with in Turkey. 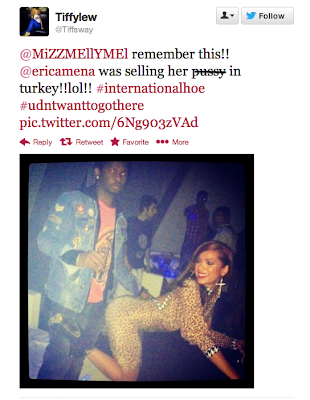 “@tiffysway keep running your mouth with your made up lies stalker!! Lmfao look at all the time you waste in me?!? Do you really think people care or believe what you say? You were my stalker run with all the made up bullshit you want. I’m where you can’t ever be! I’m who you wish to be! I have all that you want! Your a 30 yr old woman with no job or anything to show for your self besides stalking me. I’m the high of your whole life. Sad but true”

There is a lot of bad blood between these two. Tiffany is the same woman Erica punched in the face during a fight at a nail salon in February. Meanwhile, Erica has slammed Rich, claiming that he wasn’t the right manager for her and that it was a bad idea to mix business and pleasure.