Real Housewives of Atlanta: Sheree Not Worried About Firing, On Vacation in Caribbean!

There is a reason why Real Housewives of Atlanta star Sheree Whitfield didn’t attend the Watch What Happens Live All-Star Party in New York.

While rumors continue to run rampated that Whitfield has been axed from the show, the original cast member has been vacationing in the Caribbean with her kids. Whitfield doesn’t seem to be concerned with her job status, because she just forked over a large amount of money on a week-long vacation.

While her firing has been the talk in the media, Whitfield let the world know on Twitter that she was out of the country. She tweeted, “I’ve been on a week-long vacation with my children in the Caribbean. Back to Atlanta in a couple of days.” 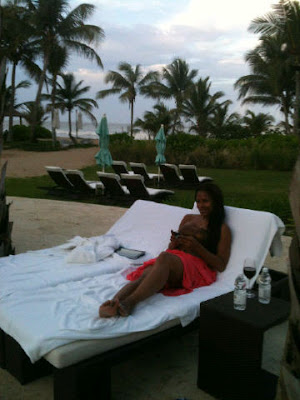 Although Sheree looks at ease in the picture, she will soon have to figure out what she will do next for a paycheck. Bravo allegedly gave her the bad news a week before the show’s reunion was taped.

Whitfield received the bad news during negotiations. She allegedly went to the meeting with an ego oblivious to the obvious fact her days were numbered. Instead of begging to be kept on the show, she acted like a diva and began making demands. In the end, she was fired.

Now, a money savvy person would think about their future and want to save money, but we’re talking about Sheree. This former housewife is going to ball until she falls. She won’t be satisfied until she’s in the welfare line.

Sheree has not confirmed or denied the rumors that her contract was not renewed for a fifth season.