Kenya is dating singer D’Banj from Lagos, Nigeria. The couple are rumored to have spent Valentine’s Day together. Kenya and D’Banj have tried to keep their relationship a secret, so that it wouldn’t upset his female fan base.

D’Banj, who is signed to Kanye West’s label, is a notorious ladies man. According to Tamara Tattles, the Nigerian women refer to him as ‘Kokomaster,’ which has the same meaning. Some of D’Banj’s lyrics include slang terms, “Koko” and “Kokolette,” loosely referring to a woman who is good in bed.

Kenya and D’Banj were first spotted together in Houston, Texas last March. D’Banj was the entertainer for a Nigerian Town Hall Meeting that was held by the All Nigerian Nationals in Diaspora (ANNID) to discuss the Amnesty & Peace in the Niger Delta.

Kenya and D’Banj arrived and left the event together. Tamara Tattles reports that Kenya posted a photo of the two of them on her Instagram with the caption: “My African Prince.” She, later, deleted the photo. 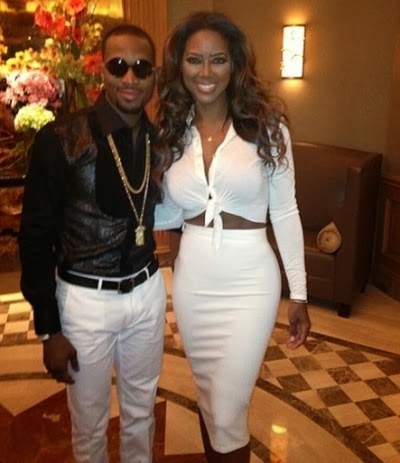 Meanwhile, Kenya and D’Banj have denied reports that she would pay him $40,000 to appear on the Real Housewives of Atlanta‘s reunion as her boyfriend.

D’Banj, whose real name is Dapo Daniel Oyebanjo, is best known for his 2012 song Oliver Twist. He’s been signed to G.O.O.D. music since 2011.

Watch footage of some of D’Banj’s performance from the Houston event below.