Baltimore Ravens linebacker Ray Lewis loves to wear a black skull cap pulled down close to his eyebrows during most of his post game interviews.

Now we know the reason behind it. The Ravens leader has a receding hairline. Ray Ray is not ready to shave it all off, so he’s doing the next best thing. Lewis sprayed on a hairline for media interviews at Super Bowl on Monday.

Lewis has that Jamie Foxx hairline working. It kind of looks like he already has on a black helmet. Check out a few photos below. 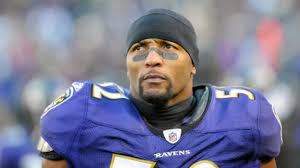