Michael Jackson’s siblings are allegedly trying to claim a share of the King of Pop’s fortune by attacking his will as ‘fake, flawed and fraudulent.”

Michael’s siblings Randy, Jermaine, Janet, Rebbie and Tito have signed a letter demanding that the executors of their brother’s will step down from their positions. They are arguing his lawyers forged his signature.

Michael died in 2009 and left all his millions to his mother Katherine Jackson and children Paris, Prince and Blanket. Katherine, 82, has been caring for the late singer’s three children since Michael died three years ago at the age of 50.

An excerpt from the letter states: “Our brother told us, in no uncertain terms and without hesitation in the months prior to his death, that he despised both of you and he did not want either of you to have anything to do with his life or estate for that matter.”

The allegations have been denied by the lawyers John Branca and John McClain, who said the claims had already been ‘completely  debunked’ by a judgment in the California Supreme Court.

According to TMZ, Jermaine and Randy are said to be using their mother as a ploy. The letter alleges that the executors are so bad at their job that the stress caused Katherine Jackson to have a stroke.

Sources told the website that Randy and Jermaine hope to get their mother declared as terminally ill in an effort to get conservatorship. They want to be in charge of the $70,000 a month that the estate provides.

Sources believe Randy and Jermaine (they are not including the others) are strapped for cash and know when Katherine dies there is no way they can get their hands on MJ’s fortune. The money will go to charity and in a trust for Michael’s three kids.

Meanwhile, Katherine’s people have denied she had a stroke. And claims of mismanaging Michael’s estate also appear to be false as well. New court documents reveal the Estate has grossed nearly half a billion dollars, which paid off Michael’s debt.

Michael’s daugther Paris defended her grandmother on Twitter and called her uncle Randy a liar after he tweeted that the letter was true. 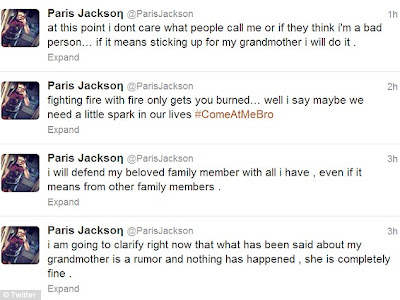