Somewhere reality star Kim Kardashian is getting a good chuckle.

Kardashian’s estranged husband Kris Humphries of the Brooklyn Nets and Boston Celtics point guard Rajon Rondo got into a shoving matchin the second quarter of Wednesday night’s game. Both were ejected for their role in the fight. 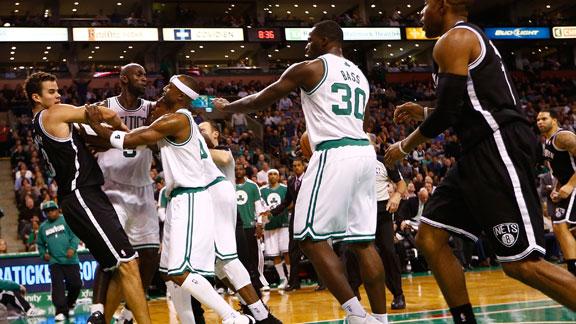 It all began after Humphries fouled Celtics center Kevin Garnett on a shot attempt. Rondo thought is was flagrant and he immediately became upset. Rondo began pushing Humphries before other players jumped in. The fight spilled over into the chairs close to court.

This is just the latest episode for Rondo, who has a history of being a hot head. He was suspended for two game in February of last season after he threw a basketball at a referee’s head.

Humphries took a jab at Rondo on Twitter after the game. He tweeted the photo below with the caption: “Anyone know where I can get a quick Tetanus shot in Boston?”

Watch the fight below.