Prophetess Juanita Bynum didn’t get a chance to speak at an event in Dallas, Texas on Friday.

Bynum was behind bars after being picked up on a “capias warrant” on April 18. According to online records. Bynum was booked into the Dallas County jail on civil charges.

The 54-year old allegedly is being held in connection with a lost civil judgement regarding a $125,000 advance to star in a stage play that she didn’t participate in. Bynum is being held without bond, Obnoxioustv reports. 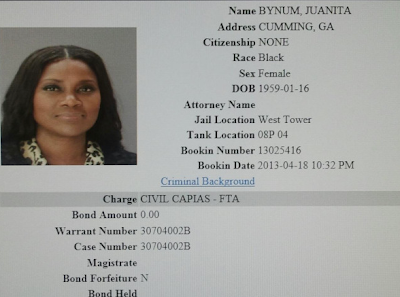 Promoter Al Wash allegedly won a civil case. The judgment specified that Bynum was to make payments until the judgement was fulfilled. However, she failed to make those payments and failed to appear before the court so a warrant was issued for her arrest.

Bynum is no stranger to lawsuits and the legal system. She fought a lawsuit brought by former Def Jam Vice President of A&R, J.E. Jones, who said Bynum stole a song he wrote entitled, “Soul Cry (Oh, Oh, Oh)” in 2010.

Bynum also divorced her husband Thomas Weeks III after he allegedly beat her in the parking lot of an Atlanta hotel in 2007.