President Obama and his family enjoyed 10 days of fun in the sun in Hawaii.

The President enjoyed trips to the gym, golf and a snorkeling trip to Hanauma Bay. President Obama hit up the Marine Corps Base Hawaii beach to avoid paparazzi but that didn’t seem to work. TMZ was able to snap the President enjoying the water and playing football.

President Obama, who was spotted shirtless, was the quarterback on the team and he was photo throwing passes and even eating dirt. He took a plunge to the sand, diving for a pass.

These aren’t the first photos to show off Obama’s physique. A few other shirtless pictures made the rounds in 2008. Check out the photos below. 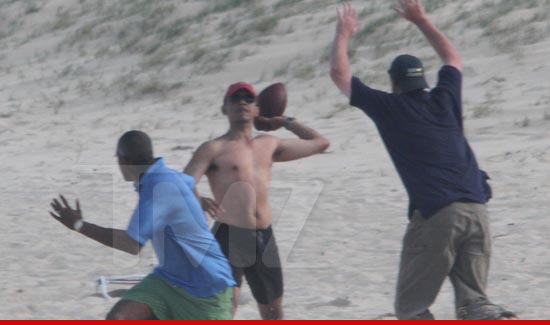 The Obamas arrived on Air Force One at Hickman AFB. He rented a five-bedroom $7.9 million estate in Oahu. Check out photos of Air Force One and the mansion.