Miami rapper Pitbull didn’t like what Lil Wayne said about the Miami Heat.

And to prove it, Pitbull recorded a diss song about Tunechi. It was in retaliation for Weezy’s reckless comments about the Heat during a concert. Lil Wayne told the crowd,”“If you’re wondering why you didn’t see me at the All-Star game. It’s because I was banned from attending all NBA events. The Miami Heat got me banned. F*** NBA! F*** NBA! F*** Lebron! F*** SheWade! F*** Chris Bosh! And I f***ed Chris Bosh wife!”

Here’s a deposition, watch what you speak /Who’s the definition of Miami? Me /I move cultures, don’t believe me – watch and see/Ask Barack Obama, he’ll bet the White House on me/You got money, yeah – yeah, that’s sweet/But we all know Baby and Slim really eat/You talk Miami, if you talkin’ heat/Moral of the story: don’t shit where you eat

Once Lil Wayne got wind of what Pitbull said, he quickly reached out to him on Twitter.

Pitbull responded with the comments below. 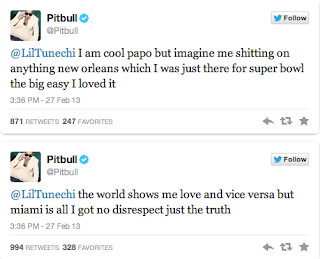 In an interview after All-Star Weekend, Wayne tried to clarify that he meant no offense to the residents of Miami.
“I ain’t apologetic for being who I am,” Weezy said. “I am who I am, and doing what I do, is what I do. As far as the city of Miami, I do wanna apologize for the misunderstanding and whatever has everybody thinking that I have something against the city, because that’s totally wrong. These people accepted me with open arms since day one, since I was a Hot Boy. It’s just totally sports, this ain’t got nothing to do with the city of Miami.”