Octomom Nadya Suleman swore she would never go on welfare.

Suleman vowed in 2010 after giving birth to octuplets and explained that she refused to become “a self-fulfilling prophecy” by accepting government assistance. But as it turns out, Suleman is eating her words.

The mother of 14 kids is receiving $2,000 a month in assistance from the State of California, TMZ reports. The money is placed on a debit card each month and can only be used for food. Suleman is being closely monitored by the state so that no illegal purchases are being charged.

Octomom qualified for the card because her income is less than $119,000 a year. A family of 15 that makes less than that amount is entitled to welfare benefits. The amount is based on an average of just under $8,000 for each member of the household.

Suleman has been strapped for cash the last couple of months. She’s facing eviction from her La Habra, Calif. home, the Los Angeles Times reports. The 36-year-old mother has been struggling to pay her mortgage for years. She’s taken her kids out of private school, except for one of her son’s who has autism. It’s saving her $4,000 a month. 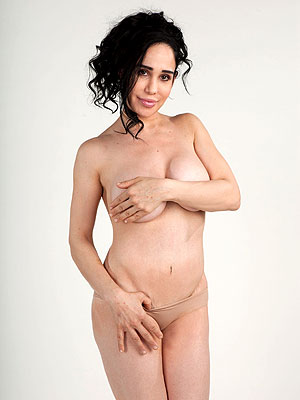 But the saving still doesn’t put a dent in her debt. Suleman has had to find other ways to bring in income. She agreed to pose partially nude for Britain’s Closer magazine to help pay her debts.