Nicki Minaj and Meek Mill are letting their photos do the talking.

It appears that Meek and Nicki were partying with Rick Ross and girlfriend Ming Lee, Wale and others at a club after his tour stop on Friday night. They all crammed on a couch for a photo. 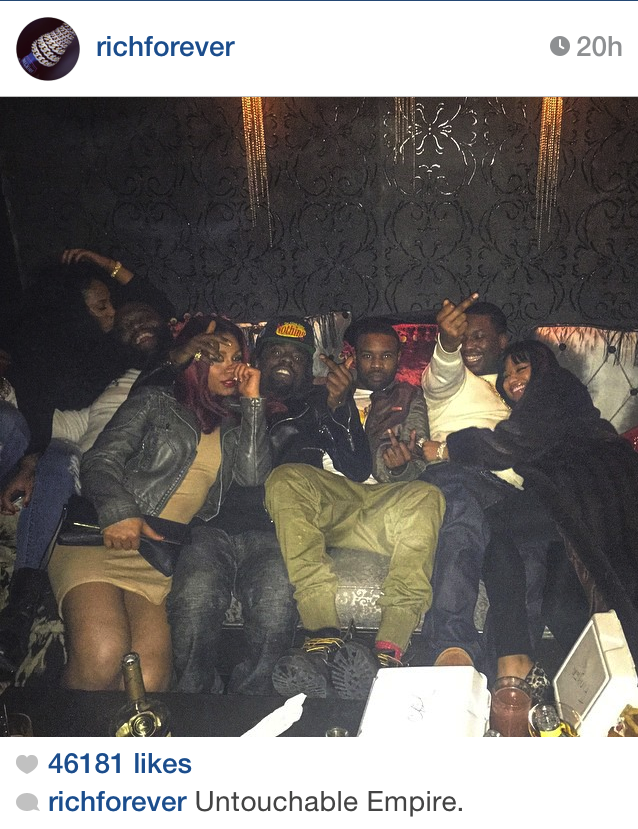 This latest photo comes a day after Nicki threw a little shade at her ex-boyfriend Safaree Samuels on social media. Nicki responded to a comment comedian Lil Duval made about Safaree being corny. Check out the exchange below.

And before she commented on Duval’s comment she wrote a lengthy rant about her relationship with Safaree after he stepped out with girlfriend Candice Brooks. Nicki wrote on Instagram:

You can’t find happiness with bitterness, hate and unforgiveness in your heart. You owe it to yourself to find real peace. Why do ppl feel they have to be “ok” all the time? Its ok to NOT be ok. You’re human. I hate seeing people be tormented and on the verge of going crazy because of their pride and their ego and because they made a bed they never thought they’d have to lay in. If you were on your death bed tomorrow, none of the ppl you do all this fronting for would be there.

You can’t try to hurt a person who’s heart is right and who showed you the meaning of loyalty. Its better that you do some soul searching and live in GRATITUDE. Realize how blessed you were and learn from your mistakes. Sometimes the more you do for ppl, the more they think they’re entitled to! Just fall back and ask God to show them the truth. Once you have forgiven and learned how to find true peace, the most you can do is wish the next person well and pray that they too will find the same thing.

I’m hoping that 2015 will be a year we choose real happiness over the fake made up stuff we think people want to see. Every night, the lights and cameras stop flashing and there you are. its just YOU. Laying there. Facing the music. Cherish these nights. Cherish these ppl. Life is a movie, but there’ll never be a sequel. And if you didn’t cherish them in time, own that. Hope you feel better.

Nicki and Meek deny being in a relationship. But many suspect the two are lying being that Nicki never publicly said she was in a relationship with Safaree until they broke up after 12 years of dating.

Apparently, Meek has been waiting in the wings for Nicki the last five years. Back in 2010, Meek tweeted he wanted Nicki. Guess his dreams have come true.