Nicki Minaj and Meek Mill are no longer a couple.

Minaj announced the news on social media on Thursday. The Starships rapper kept is short and sweet and said she is moving forward with her career.

“To confirm, yes I am single,” Nicki wrote on Twitter. “Focusing on my work & looking forward to sharing it with you guys really soon. Have a blessed New Year. Love u.” 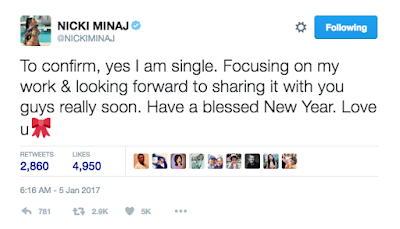 And it didn’t take long for Mill to respond with a jab. He posted the photo below with the caption, “If you walk out don’t wear these,” in the since-deleted pic. “they wack.”

Mill also shared a video on Instagram, in which he said, “I need love,” while singing along to LL Cool J’s classic. An off-camera friend responds by saying, “You need a fuckin’ thot.”

Although it’s unclear when Minaj and Mill started dating, their relationship became public in February 2015. But in the last few months, rumors of a breakup plagued the couple.

The most recent of these rumors surfaced last month when fans realized Minaj and Mill had unfollowed one another on Instagram.

FUN FACT: Shortly after Minaj announced she was single. Many believed Safaree made a post directed towards Minaj that read, “Hey big head.” He may want her back.