Tebow is not the only virgin in the NFL. Amukamara revealed in a recent interview with Muscle & Fitness Magazine that he is also saving himself for marriage.

“Some people call me the black Tim Tebow,” Amukamara said. “Yeah, I am a virgin. I’m not ashamed to say that.” 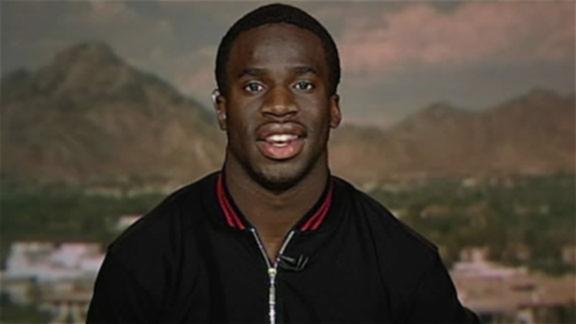 Unlike Tebow, Amukamara is one step closer to sealing the deal. The devout Catholic is engaged and is planning to get married this winter. The 24-year-old also said he has never tasted a sip of alcohol.

“I grew up Catholic, so it just started out as one of those things,” Amukamara said. “I’d think, ‘If I do this, maybe I can get to heaven,’ so I said no drinks, no sex, all the big things. As I grew up, I realized that’s not what it’s about. It’s about having a relationship with Jesus. It’s not about ‘Don’t do this. Don’t do that.’ But still, it’s just one of those things I haven’t done, and I don’t see any benefit to doing it. You’re always reading about people getting DUIs. So many bad things that happen and wind up in the paper are alcohol-related, so by not drinking, it saves me, my team, and my family a lot of trouble.” But Amukamara has not ruled out getting his drink on at his bachelor party.

“I told my fiancée that I’ll probably take my first drink at my bachelor party,” he said. “I don’t know if I will.”