Miami Dolphins wide receiver Chad Johnson is in a world of trouble.

Johnson, who recently changed his last name from Ochocinco, was arrested for domestic violence on Saturday night. Johnson, 34, allegedly head-butted his wife Evelyn Lozada during an argument in the car. When police arrived, Lozada had lacerations on her forehead. The Basketball Wives star sought treatment at a Florida hospital.

The fight began when Lozada found a receipt for condoms in the center console of the newlyweds’ Maserati. Lozada confronted Johnson about the receipt and a verbal argument began, the Miami Herald reports. During the heated exchange, Johnson allegedly head-butted Lozada while they were in the driveway.

Johnson told police he butted heads with Lozada by accident. The Miami Dolphin must go before a judge before he can be released. If convicted, Johnson faces a maximum penalty of one year in jail and a $1,000 fine. He could also receive community service, probation or anger management classes.

This is not Johnson’s first domestic violence arrest. Johnson had an altercation with his then-girlfriend Chevon Jex during his college years. Johnson was placed on probation for the offense and had to take mandatory anger-management classes. 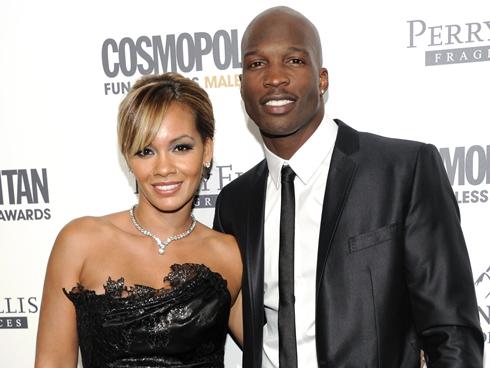 Johnson and Lozada were married on July 4th after the wide receiver proposed in November 2010. The couple filmed reality show, Ev and Ocho, that chronicled their wedding. It is scheduled to air on VH1 in September.