The New York Jets got rid of one quarterback and signed another in a matter of minutes.

Mark Sanchez was released by the team on Friday. And in a span a few minutes the Jets announced the signing of Michael Vick to a one-year deal. Vick will be reunited with Jets offensive coordinator Marty Mornhinweg.

Mornhinweg was Vick’s offensive coordinator in Philadelphia for four seasons (2009-12). Vick’s one-year contract with the Jets is worth up to $5 million, according to ESPN.com. 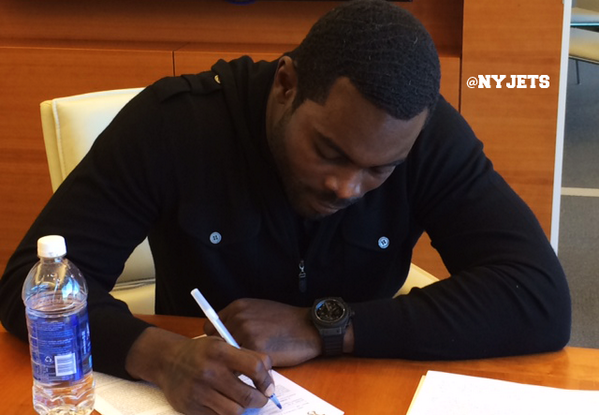 Neither transaction should come as a surprise. Many suspected that the Jets were going to cut Sanchez before the season. Though releasing Sanchez will cost $4.8 million against the salary cap this season, it frees up $8.3 million this season, according to Manish Mehta.

Meanwhile, Vick is allegedly making a fuss over Jersey No.7. Quarterback Geno Smith is currently wearing the number.

Vick has worn No. 7 throughout his entire career. He wore the jersey number at Virginia Tech and has worn it during all 11 of his NFL seasons. He even has a clothing line called V7, and the brand name would make little sense if he stopped wearing the number.