The budget for Leakes’ wedding was $1.8 million of which Cook says she was entitled to $270k plus another $889,900 for design fees and $1750 for plane tickets from Florida to Georgia.

Cook, who claims she was initially paid a down payment of $18,750, hasn’t received anything since then. She is suing for the balance of $1,142,900 plus damages. In total Cook Is asking for more than $2.5 million for her troubles.

A rep for Leakes told TMZ that the planner used for the wedding was a man named Tony Conway and not Cook. This lawsuit has no merit and it appears to be a baseless attempt to grab 15 min of fame.” 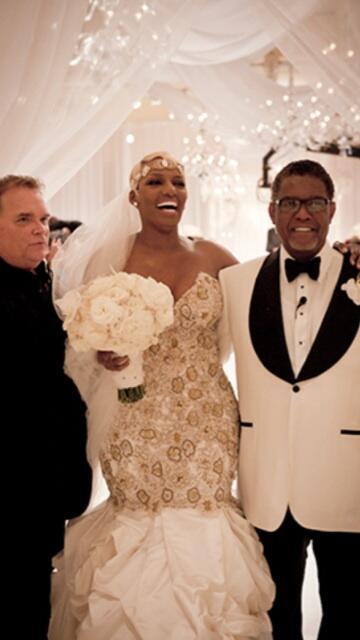 Leakes also vented about the suit on Twitter. She posted the photo above with the caption: “Here’s a photo of me, Gregg & our wedding planner Tony Conway! I can’t b telling the truth because all I do is lie.” She also tweeted, “My wedding planner was Tony Conway & I don’t owe him a dime! My wedding was paid 4 n cash! Tune n Sept 17th @ 9pm on Bravo & see 4 yourself!”

Check out more of Leakes’ rant below.