Los Angeles Clippers star Lamar Odom must have had a long night before his child custody hearing.

Odom couldn’t keep his eyes open in court at a New York courthouse Tuesday. And the six-foot-10 star fell asleep on the bench. The court officer noticed Odom slumped over and he woke him up.

“Excuse me, are you OK?,” the officer asked Odom according to the New York Post. After Odom said he was fine, the officer said: “I need you to sit up.”

Odom sat up for a bit but eventually slumped over again, resting his head on his hand. The Clipper star and Liza Morales is fighting over custody of their daughter Destiny and son Lamar Jr.

Lamar Odom Spotted Getting Cozy With Other Women..Not Khloe [Details] 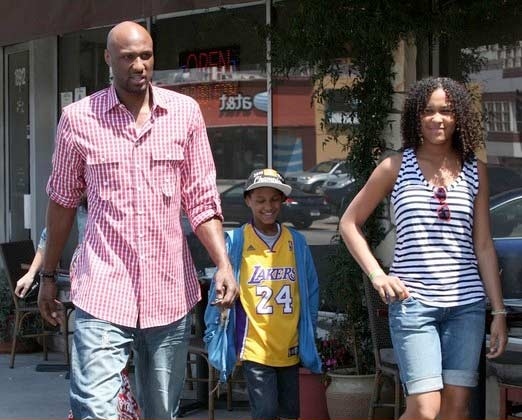 The battle over custody has allegedly intesified after Odom’s daughter revealed that she cuts herself on Twitter. According to Perez Hilton, the 14-year old tweeted that she was feeling emotionally distressed in February.

“I feel as If I am drowning in my own emotions, and I have no home to save me,” Destiny tweeted. One of her followers then asked her how often she had been cutting herself, and she responded: “Tonight and I don’t count.”

Destiny was allegedly upset because she hadn’t been spending time with her mom because she was busy filming her short-lived reality show, Starter Wives Confidential. But lucky for her the show was recently cancelled. The TLC show  was reportedly cancelled over lack of public interest.

So now Morales, who refuses to date anyone else, has a lot of time on her hands again.

In an open letter published on The Daily Beast website, Morales said Odom’s whirlwind romance and marriage to Khloe Kardashian hit her hard.

“I don’t think I’ll forget the tight knot I felt in the pit of my stomach the morning I received the text message with three simple words on the screen. It read ‘I’m getting married’ and it was from the man I’d spent more than 10 years of my life with,” she said.

“Years that included us getting engaged in 2000 and becoming parents to one daughter and two sons. Yet not long after our separation Lamar Odom was getting married to Khloe Kardashian, a woman he’d met four weeks before.”

She added: “How could the man who’d constantly given me reason after reason for why we couldn’t get married just yet now be ready to tie the knot so quickly? There aren’t words to explain how I felt that day.”

She continued: “We kept things cordial for the children’s sake after the breakup, but that changed when he married Khloe,” she said.

“Now we only communicate through third parties and lawyers, which I regret deeply since it is exactly what we each experienced as children and said we wouldn’t do to our kids.

Morales’s emotional wounds are reopened every time she reads the blogs or watches the Kardashians on TV.

“As I continue to move on with my life, it can be difficult to avoid hearing about the Kardashians day in and day out,” she said.

“But I do what I can to ignore the constant chatter and I try to keep it from the kids as well so they can have a life that is as normal as possible.”

Morales said her relationship with Odom, whom she met in high school, severed her bond with her father.

“I did have a very close relationship with my father, whom I loved dearly and consider my hero. He worked very hard to make sure I could attend Catholic school and have everything I needed,” she said.

“But when I started dating Lamar that all changed. My father is Puerto Rican and he didn’t approve of me dating a black man.”