Wade showed up to the postgame press conference of Game 1 of the Eastern Conference Finals in a light shade maroon suit. His ensemble would have put him amongst the top of the best dressed list if he wouldn’t have pieced it with a mint green tie and sleeve.

Oh, and let’s not forget about the little flower brooch he wore on his jacket. We understand the ‘pop of color’ trend but this is ridiculous. Mint green and maroon should not be pieced together, EVER!

This was the second time that Wade matched his finger wrap with his wardrobe. Remember the pink pants he wore last week?

Wade’s color choices must be rubbing off on his teammates because Chris Bosh even tried the trend Monday night. Bosh wore a gray blazer with a pair of peach pants. 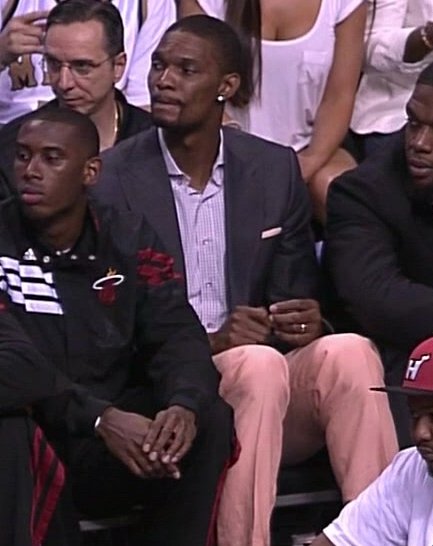 The peach pants may be a little too much for our taste but at least he opted for the straight leg instead of the skinny jeans style like Wade.