Controversial DNA results were released that allegedly showed Jackson was Brandon’s father. But the results have been heavily disputed, especially from those managing Jackson’s estate.

Although the 31-year old doesn’t deny being Jackson’s son, he claims he doesn’t want any of the King Of Pop’s estate.

Brandon claims he didn’t want his DNA tested this way.

“To my fans, family, and friends, despite recent allegations, I did not authorize the testing of my DNA to be compared to that of the late Michael Jackson,” he said in a statement. “This spring, I agreed to be a part of a documentary with FilmOn.TV and was asked to give a sample of my DNA. Even though I agreed to this I never expected it to be used in this manner.”

FilmOn.TV were allegedly behind testing Brandon and Jackson’s DNA. The owner of FilmOn.TV claims that he got Jackson’s DNA from a dental impression of the late singer, even though the impression is 30 years old.

Now Miki is responding to the rumors. Well sort of. She never denied the allegations but simply said she couldn’t talk about it. One fan asked her directly on Twitter. 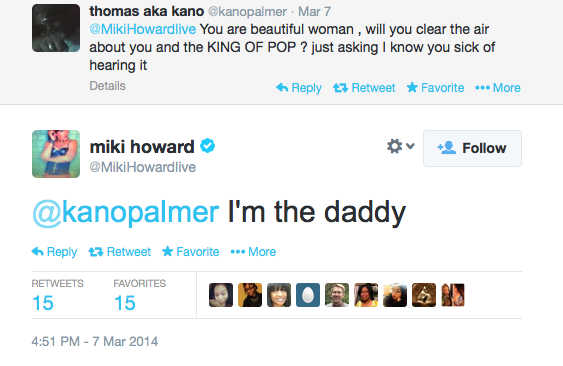 Later Miki, who was represented by Joe Jackson in the 1980s, gave a statement to You Know I Got Soul:

“I love and support my son and the Jackson family. The Jacksons – who are dear, long-time friends of mine – are beautiful people and have always been loving and supportive of me and my career. As to this claim – at this time I am not at liberty to discuss this as it is common practice in our business that celebrities have non-disclosure agreements. And, we are NOT suing anyone!”

“We’ve never even heard from him,” Weitzman said. “Any deadline for claiming to be Michael’s child has long since passed.”

The allegations were dismissed by singer Augie Johnson, who claims he is the real father of Brandon.