Michael Jordan And Wife Yvette Are Expecting a Baby! [Photo]

Charlotte Bobcats owner Michael Jordan and his wife Yvette Prieto are expecting their first child together.

Jordan’s rep confirmed it to E! News on Saturday. TerezOwens.com was the first to report about the pregnancy. The website got a hold of the photo below that shows Yvette very much pregnant. She’s allegedly is due in three months.

The 50-year old allegedly had his vasectomy reversed in July so he and Yvette could start a family together.

“That was part of the deal of them getting married,” a source told Gossip Extra. “Yvette was pretty adamant about having children with Mike. He had the vasectomy as his first marriage ended.” 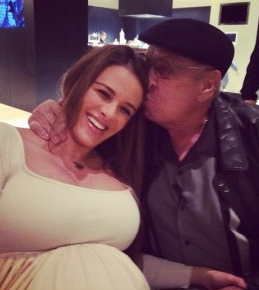 Jordan began dating Yvette, 34, about five years ago. The couple got married in April in a lavish ceremony in Palm Beach, Florida,
Michael Jordan’s Son, Marcus Jordan, Tweets Peen Pic, Then Claims He Was Hacked! [Details]
Jordan has three children from his previous marriage to Juanita Vanoy. Their kids are Jeffrey Michael, 24, and Marcus James, 22, and daughter Jasmine, 19.
Photos via TerezOwens.com and People.com