Michael Jordan: ‘No question’ I would have beaten LeBron James [Video]

NBA Hall of Famer Michael Jordan is still talking major trash even though he’s been retired for years.

But with good reason. Jordan is considered by many to be the all-time greatest athlete in the world. And he has six NBA championships and five NBA MVP awards to back it up. So when fans ask Jordan who he thinks would win in a game of 1-on-1 between him and Lebron James, his answer is easy. He puts all his money on himself.

On Saturday, when he was asked if he could beat James 1-on-1 in his prime, Jordan joked that he knew his response was going to go viral. That didn’t discourage him.

“No question!” he said at his basketball camp in Santa Barbara. 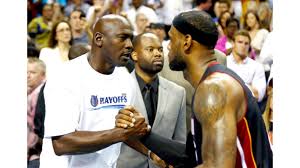 There’s no player on earth Jordan feels could beat him when he was in his prime, and deservedly so. However, he alluded to the fact that he would have some trouble against James at his current age when a camper asked if he would rather play 1-on-1 against Stephen Curry or James.

“Right now, or when I was in my prime? Right now? Buddy, I couldn’t beat — well, I’d go against [Stephen] Curry because I’m a little bit bigger than him,” Jordan explained. “So I could kind of back him in. But LeBron is a little bit too big.”

You can see the full video of Jordan answering questions from his campers below.