It appears that Meek Mill can’t believe people are siding with Drake.

After the Philadelphia rapper released Wanna Know diss song about Dreezy on Thursday night, he hoped on social media to call out the industry for giving respect to artists who don’t pen their own lyrics.

“So this is rap now!” Meek wrote, under a post that has a photo of Drake, and a photo of his alleged ghostwriter, Quentin Miller. “You can have a n—- write ya raps and that’s acceptable.. just like in the streets you can tell on people and still b the man and get the same respect as the next man! It’s almost over for the the game lol I’m confused outchea…… I’m making all trap music after I do my thang with them! We still loaded! #quentinmiller changed the game #youtherealmvp” 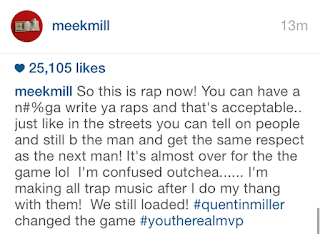 For his part, Quentin Miller has said that, “I am not and never will be a ‘ghostwriter’ for Drake.. I’m proud to say that we’ve collaborated .. but I could never take credit

for anything other than the few songs we worked on together ..” 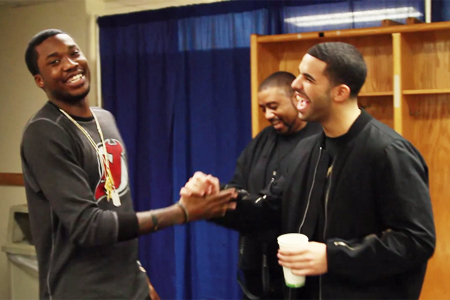 If you have been under a rock for the past week, than you’ve missed the feud between Meek and Drake. It all began when Nicki Minaj’s boyfriend said Drake used a ghostwriter for his hit tracks. Drake then released two diss songs, Charged Up and Back to Back.

Many believe Drake won the diss battle. It took Meek two days to respond to Drake’s tracks. Listen to them below.