Meek Mill Didn’t Like What Wale Said About His Drake Beef, Calls Him A Hoe

Nicki Minaj’s boyfriend has fired back at Wale after he gave his opinion about Meek and Drake’s drama during an interview with The Breakfast Club.

When asked what he thought of the Drake vs. Meek beef, Wale said, “I honestly think he brought a pencil to a gun fight. He ain’t even bring a knife—a pencil. A piece of paper. He tried to paper cut him to death.”

Wale continued, “You can’t compete with somebody that got them type of relationships. I’m tellin’ everybody who thinks that Meek lost this off the strength of losing. It doesn’t matter what he made. He could’ve wrote ‘Ether 3.0′ and the opinions of the people would’ve been that their boy from Canada waxed him.” 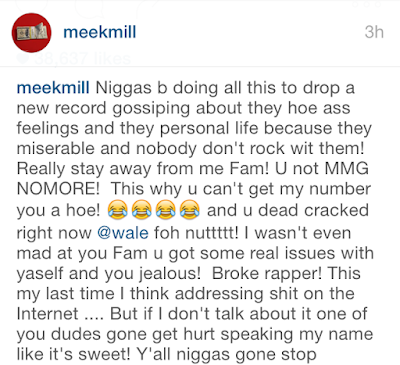 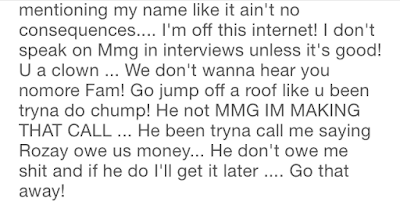 Wale responded with some humor. “Currently Lookin for a roof,” he tweeted, adding, “Anybody have any Zoloft.”

“Just got a few calls, niggas asking about my little brothers, the squad. It’s MMG forever,” Ross said. “Fuck that.” Using his camera phone, he compared Meek and Wale to opposing basketball teams. He also shouted out the MMG compilation series, Self Made 4, hinting that it’s on the way.

If you missed Wale’s interview, watch it below.