Nicki Minaj got the internet buzzing when she posted her engagement ring on social media.

The Only rapper is rumored to be engaged to Meek Mill. The Philadelphia rapper gave her boo a 15-carat yellow heart diamond ring mounted in platinum with a double halo of white pavé diamonds, which retails for a whopping $500,000.

Nicki appeared to love the ring, as well as her fans. 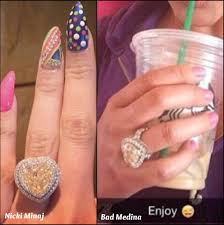 But one person wasn’t feeling it. Floyd Mayweather’s girlfriend Bad Medina was gifted with the same ring by the boxer. And she made sure everyone knew it.

Just hours after Nicki posted her photo, Bad Medina shared one of herself wearing the same ring with the caption ‘like no other.’

Meek didn’t appreciate Bad Medina’s comment and felt it was a jab towards Nicki.

Maybe Bad Medina is upset that she didn’t get the same fanfare as Nicki when she showed off her ring 15 weeks ago.

Nicki and Meek went public with their relationship in February following her breakup with longtime boyfriend Safaree Samuels.