Memphis Grizzlies star Matt Barnes and New York Knicks coach Derek Fisher may have been teammates in the past.

But they appear to be enemies these days. Barnes allegedly drove 95 miles to confront Fisher over his ex-wife, Glora Govan. Sources told Page Six, the two were involved in a physical altercation Saturday night in Los Angeles during a party at the home of Barnes’ ex-wife.

Barnes left training camp in Santa Barbara and drove the distance to Los Angeles after finding out his former teammate was dating Govan. She was hosting a bon fire for a group of friends in her backyard and Barnes found out that Fisher was there and drove down for a confrontation. A source claims the men had to be pulled apart.

Fisher flew to California after practice on Saturday to visit his children. The Knicks had Sunday off, but Fisher missed the practice on Monday because of travel problems, the team said. Fisher filed for divorce from his wife, Candace, in March. 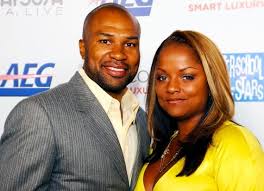 Barnes and Fisher played together with the Lakers from 2010 to 2012 and were said by one former teammate to be “very close” at the time.