Lynch, who is known for skipping out on media interviews, answered questions for about six minutes on Tuesday. He didn’t sit at a podium but he did his best to oblige questions by standing close by it.

NFL Network’s Deion Sanders was lucky enough to catch up with him after he ended the session. When Sanders told Lynch he looked good in his shade and hoodie, Lynch replied jokingly, “S—, you do too.”

Sanders was to get a few more comments out of Lynch.

“I’m just bout that action, boss,” he said. “That’s what it is. I’ve been like that since I was little. I was raised like that. Come Sunday we gonna get it. Ain’t no need to talk about it.”

Sanders then noted that Lynch doesn’t like podiums, to which he responded, “Na, that ain’t my thing.”

Lynch added that he’s, “Laid back, kicked back. Mind my business. Stay in my own lane.”

Meanwhile, Lynch has signed endorsement deal with Skittles, ESPN reports. In addition, Skittles will reportedly donate $10,000 to Lynch’s Fam 1st Family Foundation every time he scores a touchdown against the Broncos in Super Bowl XLVIII on Sunday.

Skittles has also made limited-edition packages of a “Seattle Mix,” a bag which will contain only blue and green colors, that will be distributed this week. 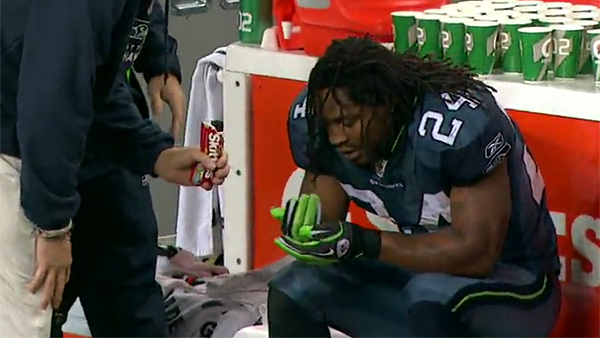 The endorsement deal stems from Lynch’s love of Skittles. Lynch always eats the cady after he scores a touchdown. Watch Lynch’s short interview with Sanders below.

Photos via Yahoo.com and Seattle.com