Love & Hip Hop star Rashidah Ali did hold back her feelings during the taping of the reunion show.

No, Rashidah told how she really felt about costar Mendeecees Harris. During the show, Rashidah told Mendeecees’ fiancée Yandy Smith that he had the smallest penis she has ever seen attached to a human being. She even tried to get Yandy to agree.

Meanwhile, Rashidah gets into a war of words with Raqi Thunda during the reunion. Madame Noire reports that tempers flared with Rashidah called Raqi a ‘fake muslim’ and insulted the father of her son. 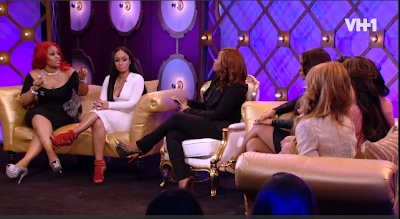 After part one of the reunion aired, Yandy responded to Rashidah on her Instagram page.

“Somethings are not worth me dignifying with a response,” Smith wrote. “A queen never steps off her throne for a peasant. I just tell them bow down and kiss the ring with the gas face. Such a small thing is causing a big uproar, huh? Maybe it wasn’t that small after all. Pardon my back and go purchase some good hair.”