First, the reality star refused to retake a drug test that led to a violation of his probation. He was arrested in April and missed the Atlanta and New York premieres of his hit show. Scrappy, later, took a drug test and it came up positive for marijuana.

Now Scrappy is reportedly headed to rehab to receive treatment for his marijuana addiction after appearing in court on Wednesday (May 22) to address his failed drug test. And to make matters worse, his fiancée Erica Dixon called off their engagement because of issues with his mother, Momma Dee.

After rumors surfaced on Wednesday that Erica is dating boxer Floyd Mayweather, Jr., Scrappy vented his frustrations about his baby mama on Twitter. He revealed he regrets getting engaged and putting Erica on the show. Check out his Twitter rant below. 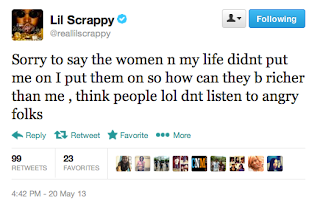 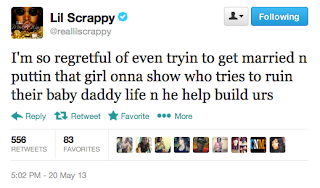 Let’s hope Scrappy was under the influence when he wrote this. If he actually wrote this sober than he’s a true hater.