Mena, who was in a relationship with Rich Dollaz, has professed her love for a woman on Twitter. Her new relationship comes on the heels of a bad split with Dollaz after gave her song Where Do I Go From Here to Oliva to record. The track hit iTunes at the No. 10 spot on the R&B/Soul charts.

Mena maybe upset that the Dollaz gave her song to another artist but it hasn’t affected her love life. The reality star has been posting glimpses of a mystery woman that she’s allegedly in love with on Twitter and Instagram.

Mena posted the photo below with the caption: “Woke up with HER.’

Mena also tweeted about her alleged mystery woman, who is rumored to be one of Dollaz’s ex-girlfriends:

Meanwhile, Mena has released an excerpt from her autobiography, Underneath it All. Read it below. 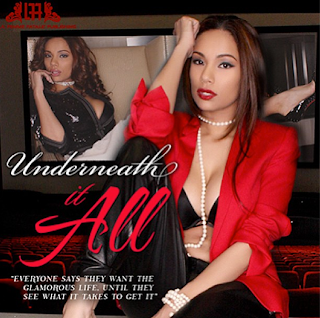 If it’s possible for a baby to have memories of being in utero then thats the first thing that comes to my mind. My mother used to sing that song to me while sitting in a prison cell. Yes you read that right, prison. She was shoved into a 6×8 cell with the very basic of necessities.

She was doing a three year bid for something that I believe any mother would have done if they were in the same situation. She was guilty of trying to provide for her children and her unborn child. She was guilty of having a “by any means necessary” mentality in the sense of doing whatever she could to make sure I came into this world not wanting for anything.

My mother has always been a go getter, a real hustler in my eyes. To me hustling isn’t something that you can teach, that person either has it or they don’t. Hustling is something as simple as bathing everyday. Either you want to do it or you don’t. You can’t make someone want to wash their own ass just like you can’t make someone want to hustle and better their lives.

See, as big as my father was in the drug game at that time he was very cheap. Yes, he would occasionally shower my mother with gifts and he made sure that she was well taken care of but at the same time he wasn’t really a good provider if that makes any sense. It’s along the lines of people saying any boy can be a daddy but it takes a man to be a father; make sense?

My father made my mother struggle more than she had to instead of helping her and giving her the things that she needed which ultimately led to her being sent away.

Anyway, my father’s nephew presented her with the opportunity to make some extra money if she would drop off a package at a specified location. She figured it sounded easy enough and even if she was hesitant, the only thing on her mind at the time was being able to provide me with a crib before I entered the world so she agreed. When she was exiting the apartment the police were going in to raid it and she was caught up in the mayhem that followed.

Life likes to wait until the bases are loaded and it seems like you’re going to go home only to turn around and throw a fast ball right at your head and knock you down. Seems like a weird analogy to use but I would soon find out how true it was and the significance it would have on my life…

Mena’s book Underneath it All is available for pre-order on Amazon and in stores April 1st 2013. Listen to Mena and Olivia’s versions of Where Do I Go From Here below.