Love & Hip Hop Atlanta extras Bambi and Alexis ‘Mary Jane’ Miller were only on two episodes but are trying to make the most of their spotlight.

Mary Jane has been making the media rounds defending her decision of sleeping with Kirk Frost. But things took a turn for the worse when Bambi called into Atlanta’s V103 The Bigg Tigger Show while Mary Jane was on the air. Bambi didn’t like the events that transpired and she called in to the show and said Mary Jane was a whore.

Mary Jane retaliated by revealing that Bambi slept with Lil Scrappy. And things have not been the same between the former associates. While Mary Jane was filming a live episode of Kandi Burruss’ weekly web show Kandi Koated Nights, Bambi crashed the show and confronted Mary Jane. But Bambi didn’t get close to Mary Jane. Apparently, the serial mistress hired security. Her mother, publicist and another woman was also present. After the incident, Bambi posted a warning to Mary Jane on Instagram that she’s going to keep crashing her interviews until she stops talking about her. 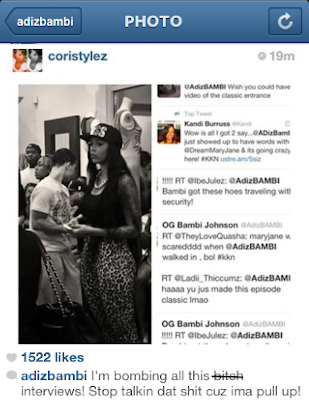 Watch Bambi explain why the two women are at odds.