Following a taping of the VH1 reality show on Thursday (March 14), the two got into a war of words on social media. Frost claimed K. Michelle was attracted to his wife, Rasheeda, and Michelle said Frost was gay and that he liked little girls.

Frost began the epic battle with the photo below and the caption: “Truth be told I think she really liked Rasheeda. Like, really liked her. Like, wanted the box.”

During last season of Love & Hip Hop Atlanta, K. Michelle and Rasheeda’s relationship fizzled after the rapper told K. that she didn’t believe ex-boyfriend, Memphiz, abused her. The two never saw eye to eye after that. They have been trading verbal assaults ever since. Frost responded,”@kmichelle u would know you’ve had so many relationships w/girls in ATL u gotta move.I’m wait 4 u 2 be real let it b known u like women.”

Check out his other tweets below.

K. Michelle ended the Twitter beef with the tweets below. 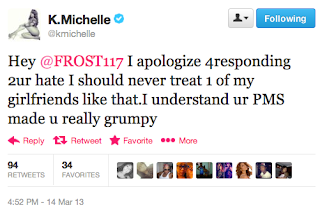 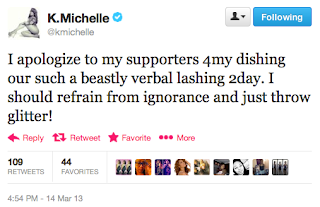 Love & Hip Hop Atlanta is scheduled to air in April on VH1.