Lil Wayne may have reached his limit.

The New Orleans native seems to be frustrated about something and has had enough. Many believe Weezy is done with rap. The Young Money CEO appears to have announced his retirement on social media. After nearly 20 years in the business, Tunechi made the surprising announcement on Twiter.

Wayne wrote, “I AM NOW DEFENSELESS AND mentally DEFEATED & I leave gracefully and thankful,” he tweeted. “I luh my fanz but I’m dun.” 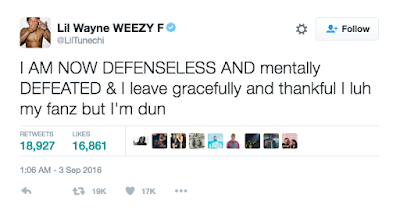 Meanwhile, Young Money president Mack Maine said Wayne is not actually retiring in response to a fan’s inquiry. “He won’t,” replied Maine. “we ain’t da quittin type and he love his fans and supporters too much! #DaGOAT #Mula.”

Wayne’s cryptic comments comes on the heels of someone calling and reporting a shooting at his Miami home. Police rushed to the scene on Friday but no victims were found. This was the second time someone made a hoax call to the police within a year.

Weezy has not settled his lawsuit with Cash Money yet.