Police rushed to Lil Wayne’s Miami Beach mansion on Wednesday after someone called the police.

According to police, the caller said four people may be injured and that they were not on the scene at the time. Miami police set up a perimeter around the house on La Gorce Island.

Wayne was not at his Miami home at the time. Young Money president Mack Maine even assured fans that everyone on their side was OK.

As it turns out, the entire incident was a hoax. The Miami Beach Police called the incident a swatting, which is when a prankster calls in a fake shooting. Previous swatting victims are Rihanna, Diddy, and Justin Timberlake.

Lil Wayne confirmed it on Twitter. Weezy wrote, “Prank kall mane. Oh yeah my bad #FWA” The Miami Police also wrote on Twitter, “MBPD handles all calls of this nature in a serious manner . In this case it appears to have be a hoax @ #LiLWaynes home . #Swatting” 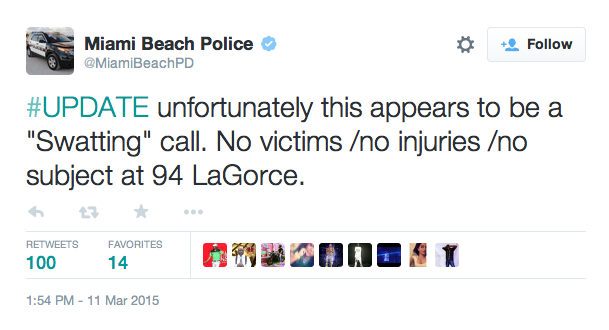 The swatting incident comes 11 days after police found a suspicious person lurking outside Weezy’s home. The man was let go because when they arrived he was on public property.