Lil Wayne and Christina Milian are back on the market.

According to Entertainment Tonight, the couple has ended their relationship after dating for a year. Milian and Weezy reportedly broke things off in August.

Rumors of their romance began July last year and Milian eventually confirmed their relationship in May.

“There’s nothing better than that feeling of that new chemistry, when you’re so into someone you really could care less about what anybody else has to think” Milian told Entertainment Tonight. “I feel so inspired by the relationship that I’m in. It’s like that careless, hopeless-romantic love where it’s like, ‘Oh my gosh, I will do anything for you,’ it’s just incredible.” 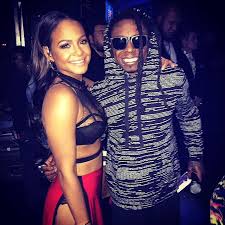 Milian is the mother of 5-year old Violet Madison from her former marriage to The-Dream. She also previously dated Nick Cannon and was engaged to Jas Prince. Wayne was previously engaged to The-Dream’s first wife, Nivea, along with relationships with Lauren London and Toya Wright.

Milian currently has her own “docu-series” on E!, Christina Milian Turned Up.