Lil Kim has a few things to get off her chest.

And what better way to set the record straight than on social media. Lil Kim is in the middle of a nasty custody battle with her ex-boyfriend Mr. Papers, whose real name is Jeremy Neil. The two share a 1-year old daughter, Royal Reign.

Lil Kim ranted about Mr. Papers, who she recently accused of domestic violence, on social media.

“I wasn’t going to address this because it is a personal legal family issue but I feel that my fans deserve to kno the truth,” Lil Kim wrote on Twitter. “Do not be fooled by the lies that are being told by these god awful blogs.” Bossip reported last week that Kim barred Papers from seeing their daughter. He filed documents in an error to seek a court order for visitation rights at least one day a week. In response to the move, Kim filed a lawsuit against Papers alleging that he beat her during their relationship and that his violent nature is the reason he’s not allowed to see his daughter, claims the blog says Kim is backing down from after Papers’ lawyer spoke out.

“I did not renig [sic] on my statement at all I have no reason to do that and The RTO still stands,” Lil Kim wrote. “He is the reason he hasn’t seen his daughter I would never want to take my daughter away from her father. But he has a lot of personal issues that need to be worked out.”

Lil Kim’s tweets has since been deleted but we caught screen shots. Read her tweets from the bottom up. 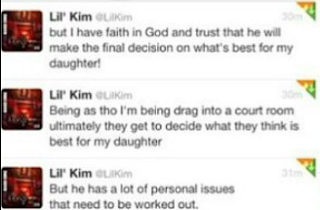 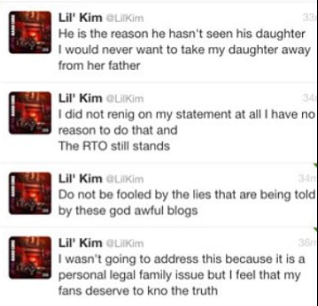