ESPN’s Outside the Lines searched through eight years of tax records and found that Odom’s charity, Cathy’s Kids, raised an estimated $2.2 million but since its inception in 2004, has failed to give any money to cancer-related causes. Odom began the charity in honor of his late mother who died of stomach cancer. It claims to raise funds for cancer research and underprivileged kids.

But investigators with Outside the Lines said the charity has used at least sixty percent of its finances to aid two elite basketball travel teams. And it allegedly paid Odom’s high school coach and best man in his wedding Jerry DeGregorio an annual salary of $72,000 from 2003 to 2011. He is now an assistant coach with the Golden State Warriors. 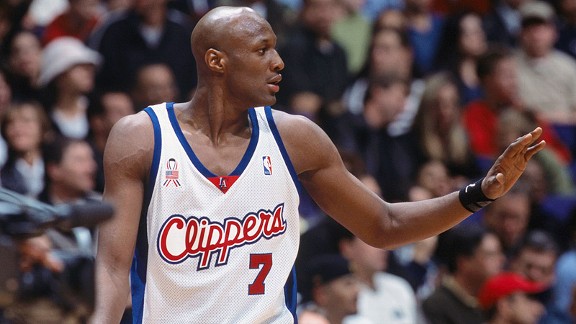 When Odom was questioned by an ESPN camera crew outside the locker room about his charity he responded: “It’s my money.”

A rep for Kardashian issued a statement to RumorFix:

“It is unfortunate that Lamar Odom has been the target of an attack on athletes’ charities, although he has personally contributed approximately $2.2 million to his foundation, Cathy’s Kids, to fulfill its charitable purposes that include helping underprivileged inner-city youth.”

The statement goes on to say that Lamar personally donated 90 percent of all the money raised for the foundations and “All of the funds donated by Lamar and the other contributions to Cathy’s Kids were used for one of the foundation’s intended charitable purposes. Not one penny went to help Lamar personally or any member of his family. No charitable funds were misused, and the IRS has repeatedly given Cathy’s Kids a clean bill of health, confirming that there were no improprieties.”

The Game Says He’s Not Sleeping With Khloe Kardashian! [Details]

But Forrest said it is possible that Odom used the money to finance an independent local team that was allowed to participate in AAU events.

“It is possible that Cathy’s Kids sponsored [an independent] team that registered to play in an AAU event. But teams like  this only register to play in our events, they are not affiliated with  AAU.”

Forrest explains, “AAU doesn’t have anything to do with local  organizations that put together independent teams. We don’t manage those  teams or deal with those local teams put together. They only register to  play.”