LaLa Anthony came under fire on social media after a woman accused her of cheating on her husband.

A Instagram user by the name of @iluvPatricele accused the Power star of sleeping with her baby daddy Maino. The drama unraveled when Patrice left a now-deleted comment under one of LaLa’s photos.  Someone was able to get a screenshot of the comments before it was deleted.

Patricia didn’t hold anything back when she addressed the star: “@lala does you husband know that your hoe ass has been f—— my daughter’s father. That you slept over his house the other night after the movies. A man that is with me and his family every damn night. How does it feel to be the slut responsible for his daughter never waking up to her father ever again!” But Patrice wasn’t done there. “[You’re] a disgrace to women everywhere,” she wrote. “Typical married slut.” 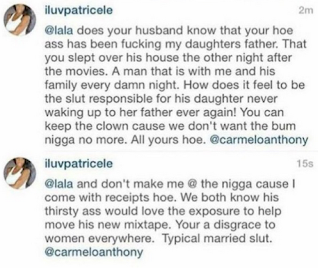 It appears that many believe the rumors. LaLa’s name became a top-trending Twitter topic on Thursday.
Photos via Instagram and XXLmag.com