Kyle Jenner And Tyga Gets Blasted By Angry Stripper [Details]

Kylie Jenner and Tyga are rumored to frequent strip clubs.

And if you believe one angry stripper, Jenner doesn’t like to make it rain in the club. She allegedly just stands there while her man enjoys himself.

Over the weekend, Tyga and his 18-year old girlfriend was put on blast on social media by stripper Doobie Diamond. She was upset because Jenner had a bad attitude and didn’t tip. Read her rant below. 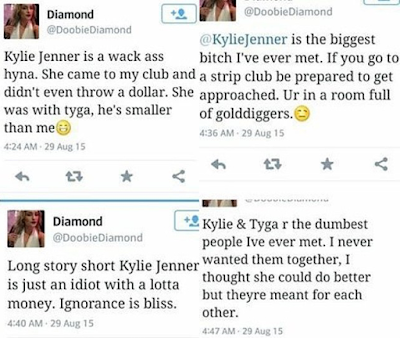 It appears Diamond just wanted to get the incident off her chest, because she later deleted all her tweets. Tyga and Jenner have not responded to the stripper’s claims. The Rack City rapper is busy dropping the video for his new song Stimulated. Jenner stars in the video and the couple show PDA. Watch it below.