Kola Boof Says She Broke Up Kimora and Djimon, Sex Tape May be Released! [Details]

Controversial best-selling author and former Osama Bin Ladin sex slave Kola Boof isn’t one to hold back her opinions about anything.

And when it comes to Kimora Lee Simmons and actor Djimon Hounsou, she is more than willing to give details about their relationship and that she is the reason why they broke up. The New York News reached out to Boof after the paper reported the couple had split because Kimora’s ex-husband Russell Simmons had stopped funding their lifestyle. Russell denies those rumors.

Boof wrote an email to the New York Daily News to clear up the alleged real reason why the couple split. She wrote:

“I am the reason that they broke up. I have slept with Djimon Hounsou throughout his marriage to Kimora Lee Simmons. I don’t think it’s a secret to people in Los Angeles.

Kimora nearly destroyed my life and my children’s lives. She is a lecherous, two-faced, money-obsessed witch and a delusional snob. Boof declined to reveal exactly what Simmons allegedly did to spark her fury.”

“It’s just too much. Djimon is a great human being. He’s just lost in a culture he doesn’t understand.”

The New York News wanted to get Boof’s take on the matter after the author claimed on Twitter that she was sleeping with Hounsou in January. She tweeted that Kimora knew about the affair.

Boof tweeted, “Oh wait…Djimon Hounsou (in a round about way) told me that I was TOO DARK.  But he f-cked me many times after Kimora had baby.”

Boof, a former writer for ‘Days of Our Lives,’ continued, “Yeah….I f-ck that bitch husband more than she do. And she know it & don’t say shit about it. She accepts it.”

Now Boof claims there is a sex tape on the way. She also blasts Kimora for putting her name in a press release. Check out her tweets below: 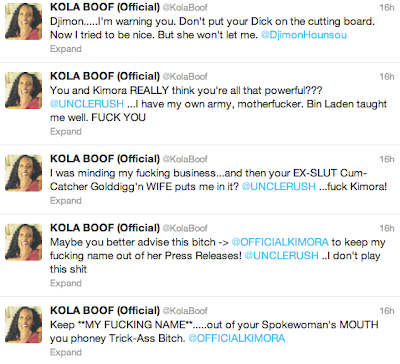 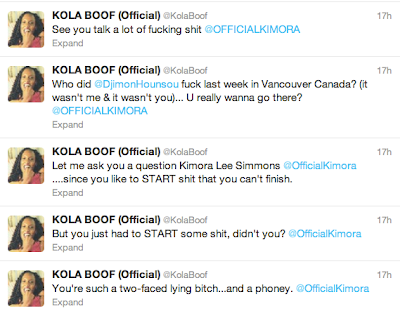 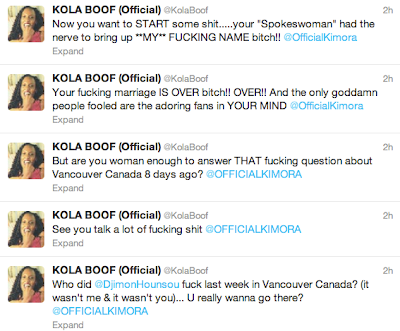 Kimora or Djimon still hasn’t commented on Boof’s comments. Kimora simply tweeted, “A real woman avoids drama, she knows her time is precious and she’s not wasting it on unimportant people, situations or things.” #GetYours #Fabulosity”