Kim Kardashian and Kanye West are officially husband and wife.

West was visibly nervous before the nuptials, sipping from a bottle of water and shifting his weight from one foot to the other.

“It was funny how nervous he was,” a source told People. “He clearly knew the gravity of what he was about to do. This morning he was all smiles, but as it got closer, you could see that the nerves were kicking in. It’s common for most grooms. I’ve seen it all before.”

A source close to West told Us Weekly the ceremony would be a “princess fairy tale for Kim,” adding, “Kanye thought of every detail.” The fashionable couple’s ceremony was only part of the extravagant memorable weekend.

The couple chose the Italian city because they conceived their daughter North there. They reportedly rented the fort, located next to Florence’s famed Boboli Gardens for $410,000.

Kardashian and West are set to attend a friend’s wedding next and will later embark on their honeymoon sans North. Kardashian’s veil had its own car.

Check out a few photos from wedding and celebrities arriving below. Check out a few photos of celebrities arriving to Italy below. 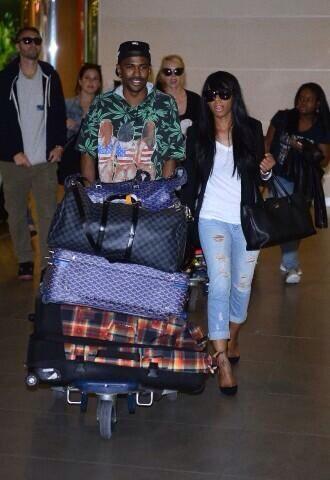 Def Jam founder Rick Ruben on the plane with other wedding guests. Sitting two rows behind Rick, Co-founder of MarketAmerica.com and Sr. VP of SHOP.COM Loren Ridinger and her husband JR Ridinger.

According to E! News, Valentino hosted an intimiate pre-wedding brunch West and Kardashian on Friday morning at his Château de Wideville, just outside of Paris. The Iguest list was limited to family members, Kim’s close friends Jonathan Cheban and Simon Huck and André Leon Talley.

Hundreds of guests then partied on Friday night at a lavish party at the Palace of Versailles that included horse-and-carriage arrivals, fireworks and a surprise performance by Lana Del Rey. Check out a few photos from the rehearsal dinner below.