Kim Kardashian is under a lot of pressure.

The Keeping Up With the Kardashians star, who is expecting her first child in July, has been scrutinized in the media for her choice in wardrobe. She’s in the midst of an ugly divorce from Kris Humphries and to make matters worse her ex-boyfriend Ray J just released the song, I Hit it First, about the bombshell.

Now, there are rumors her boyfriend, Kanye West, may be cheating on her with Australian rapper Iggy Azalea. Kim is allegedly “stressed” about West spending his time with Azalea in Paris while he’s working on his new album.

“She’s incredibly stressed and has even started to wonder if Kanye’s cheating,” the source told InTouch. “Kim is not in a happy place right now.”

Another source told Star magazine that Kardashian thinks West is treating Azalea the way he treated her before she became pregnant with him.

National Enquirer reported that the reality star fears her recent weight gain from her pregnancy will make him cheat on her.

“She’s concerned about Kanye cheating, and his disinterested and distracted attitude isn’t helping,”  a source told National Enquirer. “Kim and Kanye’s relationship used to be all about soft music, can­dlelight dinners and romantic nights together. But now that Kim has put on such a large amount of weight, Kanye seems to be busier with his music schedule than ever, and Kim doesn’t think it’s a coincidence.” 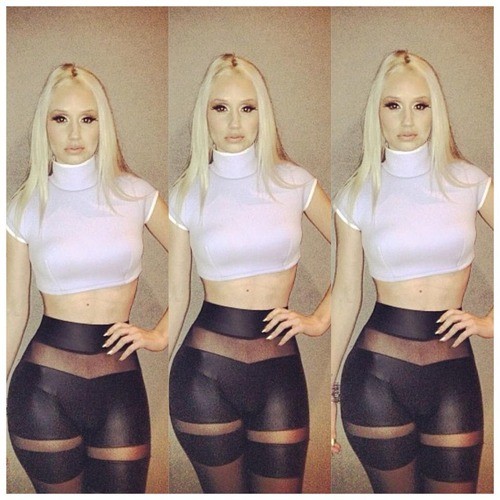 Azalea, 22, confirmed in interviews that they have spent time together.

“I was at his house last week and he was playing me his ‘scriptures,’ as he calls his spoken-word interludes,” Azalea told The Guardian last month. In another interview, Azalea said West invited her to appear in a previous music video and also wanted to sign her to his record label, G.O.O.D. music.

Kim Kardashian Admits She Dresses For Kanye West More Than Herself! [Details]

Azalea previously dated rapper A$AP Rocky. She had his name tattooed on her fingers over a year ago but after the rapper was seen on a date with supermodel Chanel Iman last month, she changed the ink job and had his name crossed out.