Keyshia Cole doesn’t want to hear from her fans what she needs to do to save her marriage.

Cole has already covered up her B. Gibson tattoo on her shoulder. She even attended her ex-boyfriend Young Jeezy’s birthday party, so it appears she’s made up her mind on exactly where the relationship is headed with her husband Daniel ‘Booby’ Gibson. But that didn’t stop a woman by the Twitter name of MoProphetess. The woman told Cole she had a good husband and she should treat him right. Those words didn’t sit well with Love star and she blocked her. Check out the exchange below. 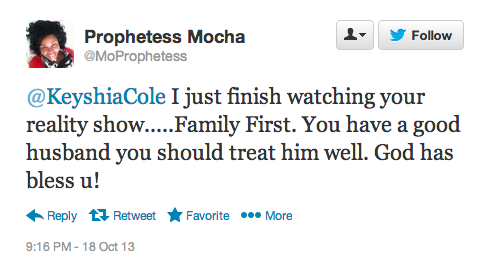 Despite Booby attending Cole’s birthday party in California last week, it appears the two are still in a rough patch with their marriage.