Keyshia Cole and Michelle Williams have put their differences aside and ended their feud.

The singers resolved their differences by phone and on Twitter Sunday after Cole slammed Williams’ performance at the Super Bowl. The feud ended after Williams asked Cole to have a one -on-one conversation during a radio interview.

Williams refused to start up a rivalry, telling Pennsylvania’s 107.9 Philly’s Morning Show, “I don’t even do Twitter beef (fighting). Can’t wait to see (Cole) in person so we can talk and say, ‘Hey, what happened?'”

Cole apparently accepted her invitation to chat and Williams took to her Twitter.com page on Sunday to tell fans the pair had made peace, writing, “Apology accepted KeyshiaCole! We had an amazing conversation and I also say sorry for ANY misunderstandings! I’m so happy this happened!”

Williams is on the record that she was a big fan of Cole for overcoming a difficult childhood due to her birth mother’s drug addiction struggles. While Cole insists that Williams started the feud, she publicly apologized over the weekend. Check out the exchange below. 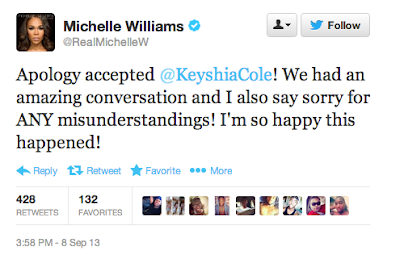 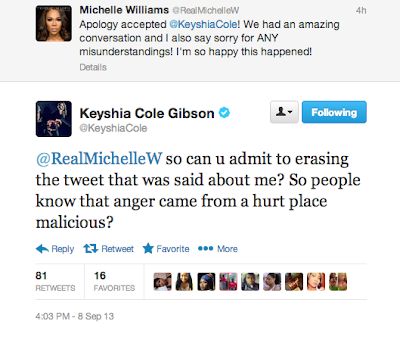 Williams has not responded to Cole’s  request.