Kevin McCall let his emotions get the best of him.

The singer got in his feelings after his daughter’s mother, Eva Marcille, left Wale a kiss emoji under a photo on Instagram. When Kevin @’d Eva under her emoji with the caption, ‘weak.’ Fans accused Kevin of being jealous.

Kevin didn’t take the criticism well. During a rant, he accused Wale of having herpes. Check out the exchange between a fan and his comments below. 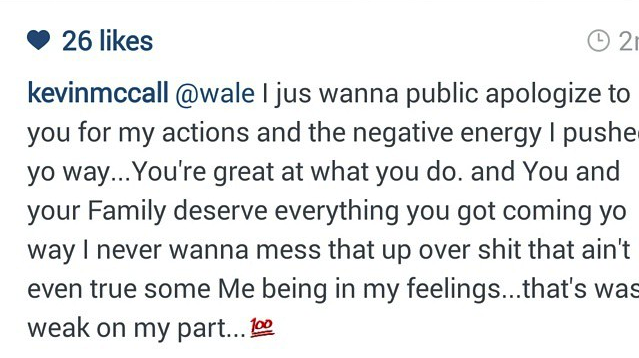 The apology was eventually deleted as well. Kevin and Eva split after a domestic incident in March. Kevin allegedly kicked down doors in the home they shared. He tried to take baby Marley out of Eva’s arms during an argument.
Eva would later file a restraining order against McCall. He temporarily lost custody of their daughter.