Kendu’s daughter Briana, who made headlines in 2009 for punching her boyfriend in the face, went on a Twitter rant about her parents not helping her. Briana claims her belongings were in a trunk and she doesn’t have a bed to sleep on.

Briana must have reached her boiling point on Tuesday and she decided to blast her parents on Twitter. Check out her rant below. 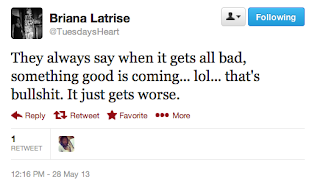