The executors of Michael Jackson’s estate have barred most of his siblings from the California home where their mother is raising the late singer’s three children.

Rumors that Randy, Jermaine, Janet and Rebbie Jackson were all banned from the estate because of the part they played in isolating Katherine Jackson in Arizona for 10 days is true. But they’re not the only members of the Jackson family barred from the Calabasas estate.

Howard Weitzman, who represents the executors John McClain and John Branca, sent an email to Tito Jackson, Jr.’s lawyer on Wednesday detailing who could and can not step foot on the property.

In an email obtained by RolandMartinReports.com, the executors states:

“Given the circumstances of the last two weeks, and in order to protect the children and Mrs. Jackson, the Executors believe that it would not be appropriate to allow the following individuals to enter the residence or its grounds and we instruct the security to preclude the following from entering the residence or the grounds: Randy Jackson and any of his children, Janet Jackson, Rebbie Jackson and any of her children, Jermaine Jackson, his wife and any of his children, Janice Smith, or anyone else who was involved in the recent events that led to Mrs. Jackson’s separation from and inability to communicate with Michael’s children, or any agents or representatives of any of these individuals,”

The ‘letter’ Weitzman is referring to is the one signed by Randy, Jermaine, Janet, Rebbie and Tito Jackson, alleging that the 2002 will authorizing Branca and McClain to be the executors of estate is fraudulent. Tito has since backed out of the letter and apologized for signing it. 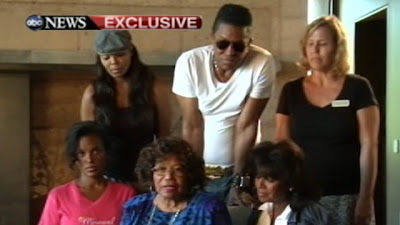 Branca and McClain are allowed to make demands on the home because it pays the monthly lease payment.

“It is imperative to the Estate that from this point forward a safe and appropriate environment be provided for Michael Jackson’s children and his mother as well,” Weitzman wrote.