Over the weekend, Chris Brown’s girlfriend posted a photo on Twitter of a Aaliyah coloring book with the caption: “Bought a cool coloring book for the plane.” Many thought it was distasteful considering the fact Aaliyah died in a plane crash.

Others believed people were reading too deep into the photo. Many though she was only coloring from an Aaliyah coloring book on a plane back to Los Angeles from St. Louis. 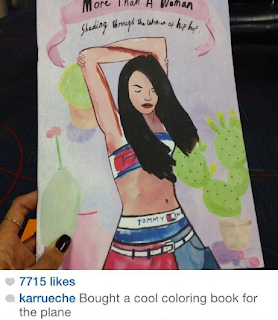 But after receiving plenty of backlash from Twitter. Tran deleted the picture and said people were twisting her words. Check out some of the comments below.

“Lets hope you die on that plane & then Aaliyah treats you like the fat girl in high school. Oh wait… You won’t get to heaven. @karrueche“

“I hope Rihanna does to you the same thing that Beyoncé did to Aaliyah. Enjoy your flight.”

After hours of dragging on Twitter. Tran admitted that she made a joke about Aaliyah’s plane crash. Read her tweets below.

Aaliyah was killed in a plane crash on August 25, 2001 on the way home from a video shoot in the Bahamas.