Karrueche Tran pulled the plug on her relationship with Chris Brown more than a month ago.

Tran couldn’t deal with the fact that Brown had a child with another woman while the two were dating. But even though the two are not officially together, Brown got in his feelings over the weekend.

Tran was spotted hanging out with model Tyson Beckford in Las Vegas on Saturday. It all appeared to be innocent but Brown didn’t see it that way.

First Karrueche’s bestie/publicist J. Ryan posted a video of Kae and crew enjoying the Memorial Day festivities with Tyson in Vegas. Then Tyson posted the photo below of the two at the Palms Casino Resort with the caption: “Saturday with @Karrueche #vegas #palms #blasian” 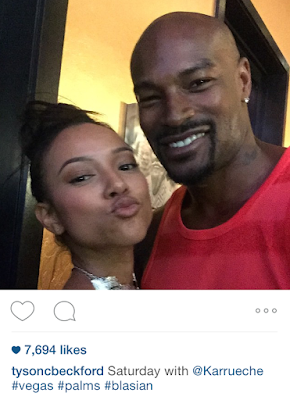 It didn’t take long for Brown to hear about Karrueche’s where abouts and who she was spending time with. One of Breezy’s friends, Kid Red, sent out a threat on social media.

Then Brown posted a photo with his Piru crew.

Brown also addressed the situation before he deleted his posts. But he kept it up long enough to let the world know he was headed to Vegas. 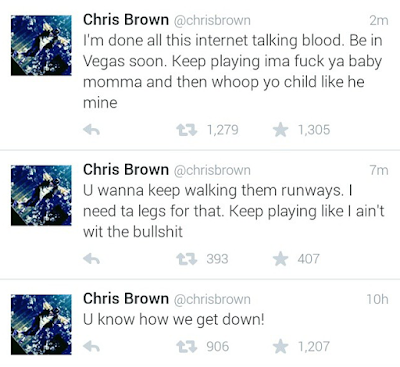 Beckford fired back by posting a video of him at a shooting range. He also told Brown he could join him Vegas. 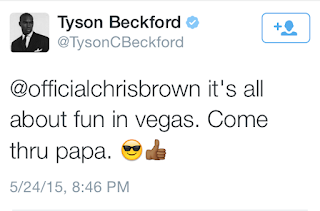 But Brown claims Beckford called the police on him. 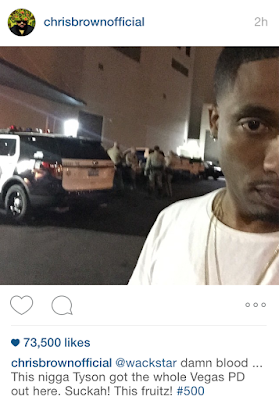 It appears Brown hasn’t learned from his previous run-ins with the law. It seems he doesn’t mind getting in trouble if he has too again.