Kanye West may be over his ex-girlfriend Amber Rose.

But that hasn’t stopped him from starring at her when they are in the same place. West was caught looking at Rose and her new boyfriend Machine Gun Kelly at the NBA finals game in Cleveland.

Despite bolting from Drake’s party after Rose showed up earlier in the week, West decided to stay when she showed up to the basketball game. A fan in attendance caught Yeezy snickering at Rose and Kelly while they were trying to go to their seats. It appears he kept sneaking more peeks at Rose. 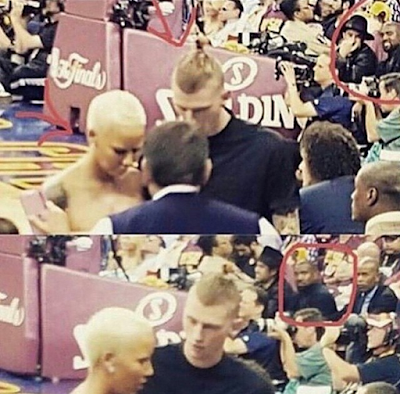 It public knowledge that West loved Rose at one point in his life. So he did what many people would have done in his position. He was sneaking peeks, its just too bad he was caught.